While Auburn is certainly best known as a university town, it’s becoming increasingly recognized for its cultural offerings.

The Auburn University board of trustees has approved a $65 million new Jay and Susie Gogue Performing Arts Center – an 85,000-square-foot building designed for top-rated musical, theatrical and dance performances, along with speakers and other events. Anticipated completion is summer 2019.

Located near the Jule Collins Smith Museum of Fine Arts, the center will include a 1,200-seat performance hall, outdoor amphitheater, box office, catering kitchen, wardrobe and dressing rooms, as well as conference and office space.

Stiling points to four principles that define the exterior design:
• Connection to Community – a grand lobby sheltered by a wood ceiling that extends beyond large expanses of curtain wall to connect the interior to the exterior.
• Transparency and Activation – large expanses of glass revealing activity within the lobby with a distinctive curtain wall design to reflect the notion of a performance venue by “drawing the curtains” on the interior.
• Expressing the Venues – promoting the presence of the main hall and future venues from the exterior to interior through material and form.
• Defining an Arts District – developing a future language through exterior materials to compliment neighboring buildings, and prepare for the future of a flourishing arts campus.

Interior aspects of the design focus on the patron experience from first to last impressions with close attention to guest amenities ranging from concessions and restrooms to aisle widths and rigorous sightline studies within the hall. The lobby was designed to support special functions such as string quartets, lectures and other events.

“The main hall features natural and adjustable acoustics which boast reverberation times on par with some of the world’s most prominent concert halls, such as the Tonehalle Concert Hall in Zurich and the Amsterdam Concert Hall,” Stiling notes.

Architectural screens within the main hall provide an intimate performance experience while allowing the hall’s acoustical volume to function effectively. These custom-design screens also conceal adjustable banners for natural tuning of the space for Broadway performances without altering the visual character of the room.

Exterior materials consist of brick, accents of stone and large expanses of glass curtain wall at the lobby. A neutral-colored brick with a custom coursing pattern is used to express performance venues, while accents of stone highlight public entrances and faces the neighboring art district. Red brick used in administration and back-of-the-house areas face the university in order to bridge the traditions of the historic campus with the contemporary nature of the arts district, Stiling explains.

“The interior features a neutral palette of finishes with a warm presence of natural wood – southern long-leaf pine – and pops of color at points of interest,” adds Stiling. “The lobby will also feature custom art installations periodically throughout public areas.” 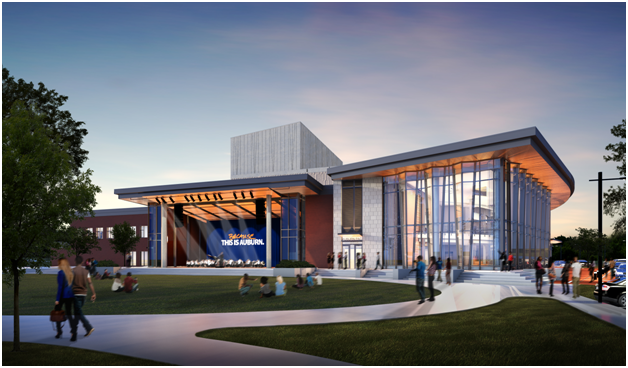 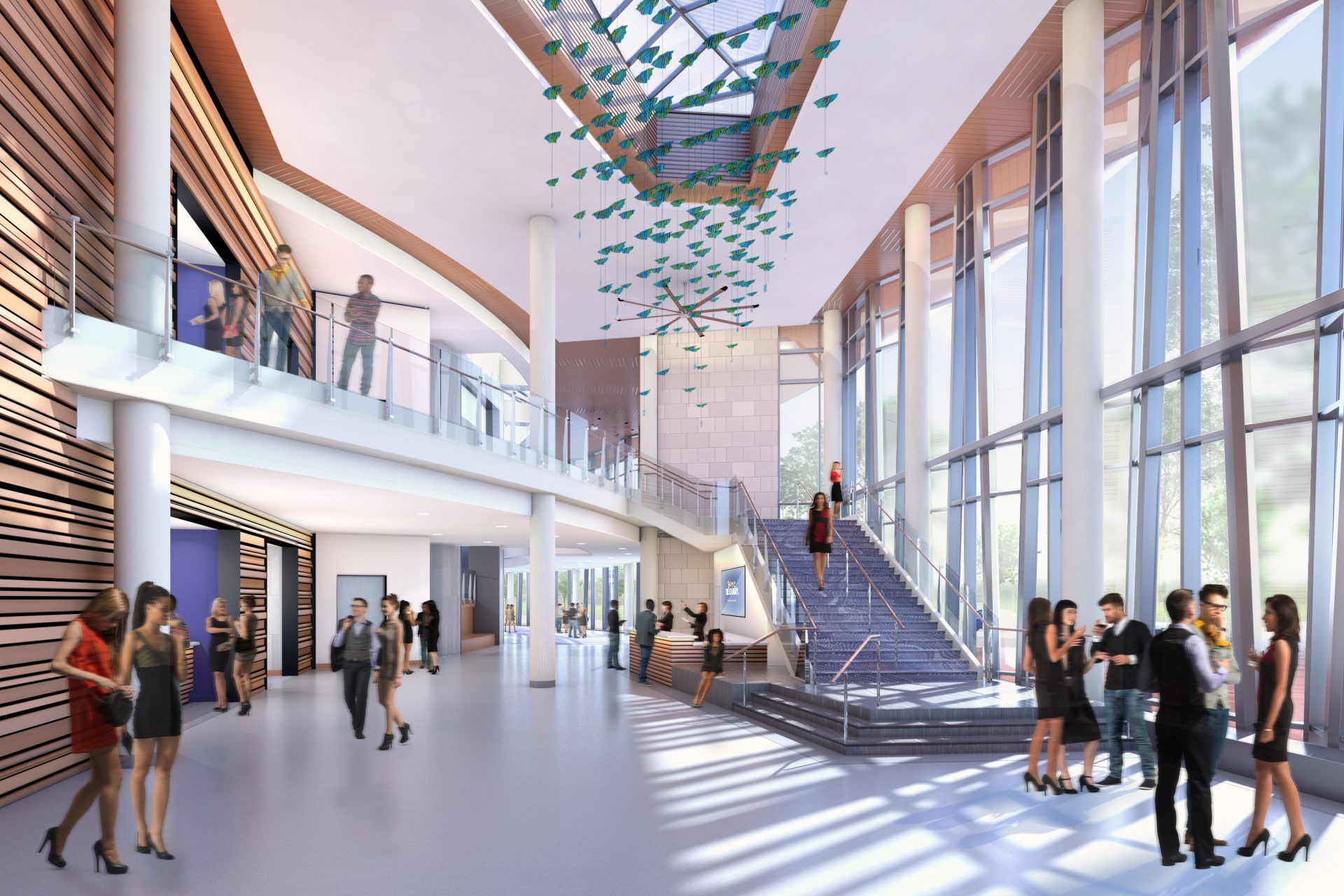 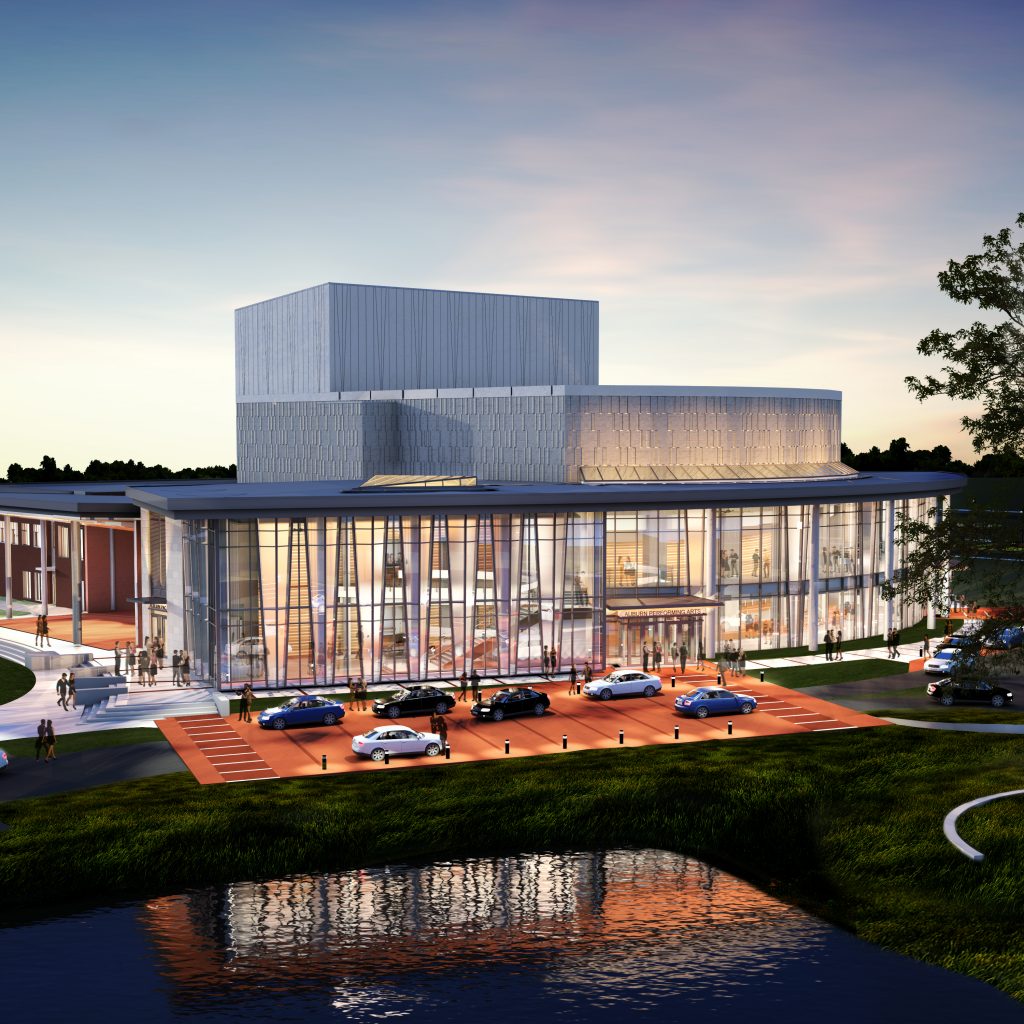 Image 1-The new Jay and Susie Gogue Performing Arts Center is sited at the south edge of Auburn University’s campus, complimentary to the Jule Collins Smith Museum. This location will contribute to a future arts district and establish a more defined gateway to the campus.

Image 2-Large expanses of glass reveal activity within the lobby. The dramatic curtain wall is designed to reflect the notion of a performance venue by “drawing the curtains” on the interior.

Image 3-The exterior materials consist of brick with accents of stone and large expanses of glass curtain wall at the lobby.

*Article By Jessica Armstrong and Images Courtesy of Auburn University