Vulcan – the 50-ton statue of the Roman god of fire and metals – has overlooked Birmingham from atop Red Mountain since the 1930s. Thanks to the newly opened Kiwanis Centennial Park at Vulcan Park and Museum, the statue cast from local iron in 1904 is now more accessible to visitors.

The north side of Vulcan Park now features a new plaza, fountain and steps leading up to the Vulcan that connects the iconic statue to downtown Birmingham. The park also includes the Kiwanis Vulcan Trail, a two-mile walking and biking trail that is the heart of the planned 750-mile Red Rock Trail System.

This $5.8 million project is the Kiwanis Club of Birmingham’s gift to the city in honor of its 100th anniversary in 2017.

Also part of Kiwanis Centennial Park is a multi-colored light show that will be projected on the Vulcan nightly. This third phase of the project is expected to be completed later this year.

Landscape architect Joel Eliason, a principal at Nimrod Long & Associates in Birmingham, says a large, monumental staircase removed during a renovation nearly 50 years ago was replaced. The original 1930s, WPA-built steps were made of stone and the new ones of concrete.

“The new staircase is our interpretation of the original and is almost in the exact location,” says Eliason.

Nimrod Long & Associates also made improvements to the terrace, and added lighting and new landscaping. Native plants such as azaleas and grasses were used to create a more natural setting. Eliason said smaller trees (and not many) were planted because of the importance in maintaining the views of the Vulcan and keeping the area open.

Also part of the Kiwanis Centennial Park project was to expose a seam of iron ore on the mountain. There are educational materials about the local iron ore adjacent to the seam.

“The Kiwanis Club of Birmingham is the largest in the world and they helped create Vulcan Park in the 1930s,” notes Vulcan Park’s President and CEO Darlene Negrotto.

“The park was only accessible by automobile and now it’s accessible for pedestrians and bicyclers. He (Vulcan) is now more visible and we now have a more welcoming entrance.” 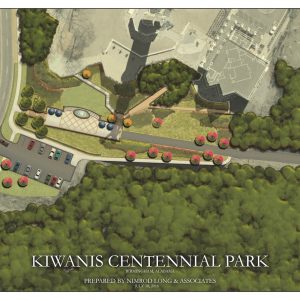 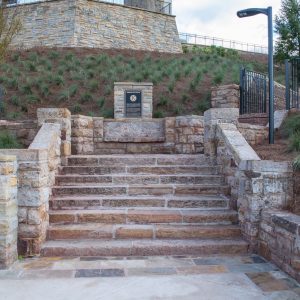 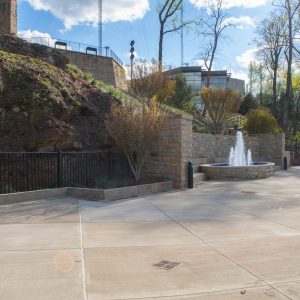 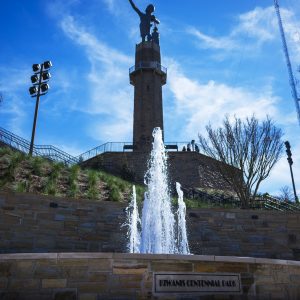 Image 1- This rendered site plan of Kiwanis Centennial Park prepared by Nimrod Long & Associates in Birmingham. The $5.8 million project is a gift to the community from the Kiwanis Club of Birmingham in celebration of its 100th anniversary.

Image 2- Nimrod Long and Associates rebuilt the staircase that was removed during a 1970s renovation. The terrace was also improved and lighting was added.

Image 3- The new Kiwanis Centennial Park improved the north side of Vulcan Park, which now features a new plaza, fountain and steps leading up to the Vulcan that connects the iconic statue to downtown Birmingham.

Image 4- In addition to the rebuilt staircase and improved terrace, the Kiwanis Centennial Park project also includes a multi-colored light show that will be projected on the Vulcan statue nightly. This third and final phase is expected to be completed later this year.