Downtown Birmingham’s skyline is about to get a revitalization of a turn-of-the-20th century, 14-story neo-gothic style building known as the Commerce Center, notes Dave Branch, project manager of Fifth Dimension Architecture & Interiors. The Birmingham firm was chosen to turn this abandoned historic structure on First Avenue North into a 96-room luxury Hilton hotel.

The project is in design development, with construction to begin this summer. Rhaglan Hospitality, who recently redeveloped the historic Redmont Hotel, purchased the building last November and was awarded a $5 million historic tax credit.

It was constructed in 1902 with a concrete and steel frame with brick and terra-cotta cladding. The building was first the original location for the Birmingham Ledger and then served as Protective Life Insurance headquarters. In the 1970s it housed the Birmingham Chamber of Commerce.

Both the original building and a 1928 renovation — which transformed it into the building it is today – were designed by the former architectural firm of Warren, Knight and Davis.

When it was the Birmingham Ledger, large plate-glass windows gave the public a view of the printing presses. Several of these windows still exist, along with areas where the public could view the newspapers being printed, notes Branch.

In addition to its three above-ground floors, the building had a two-level basement. Its foundations and columns were designed to allow for up to nine more floors to be erected above, says Branch, who notes that in 1928 there were 11 floors plus a penthouse.

“One of the greatest challenges in documenting a building of this size and age with no documentation available was to develop a strategy to accurately and efficiently prepare a set of drawings that the design team could use to start the process of design,” he explains.

“The team at Fifth Dimension utilized a combination of both laser scanning and BIM (Building Information Modeling) to develop a fully comprehensive 3D model, which in turn allowed for the creation of existing floor plans, and exterior and interior elevations.”

When the model was field-verified with the existing condition, both were within inches of matching each other, Branch adds.

This design technology allowed Fifth Dimension to quickly respond and work with the historic consultant on preparing a timely application to the state Historic Commission & National Park Service for the historic tax credits. The documentation contained in the application allowed both state and federal entities to have a precise understanding of the proposed design intent.

“The proposed design for the building will radically change the interior layouts, which in turn must incorporate the historical interior elements that are scattered throughout the building,” Branch continues.

Included in the new design is a large and open main lobby space which will restore the former large window openings to allow for abundant natural lighting. Luxury guest rooms and suites, meeting spaces, a business center and fitness center, along with a sky bar and restaurant located on the 14th floor will be part of the new hotel.

“The single greatest challenge will be in developing the design of the proposed new spaces within the context of keeping the historic elements that are required to be preserved and restored,” Branch observes. “Intricate plaster work, trim, millwork, paintings, and marble floor and wainscoting detailing are required as part of the historic tax credits to be incorporated into the project design to meld both old and new elements for a seamless transition.”

Another challenge, Branch says, will be to coordinate the upgrading and installation of new mechanical, electrical and plumbing systems. He points out that BIM technology allows the project team to provide a comprehensive and fully coordinated set of drawings to the contractor. 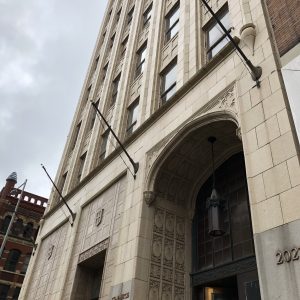 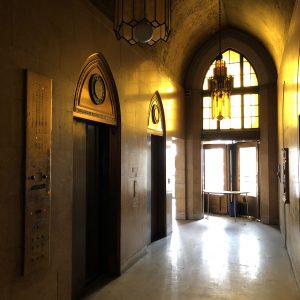 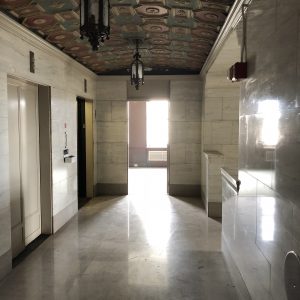 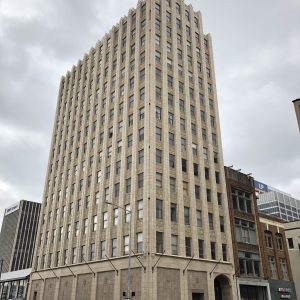 Image 1- The building has had two former lives, first as the original location for the Birmingham Ledger, and in 1928 the headquarters of Protective Life Insurance. In the late 1970s it housed the Birmingham Chamber of Commerce

Image 2- Ornate details that are found throughout the building include light fixtures, elaborate ceilings and curved gothic windows. The proposed design will radically change the interior layouts, but will retain many historical interior elements.

Image 3 -A close-up of the elaborate plaster work on the executive floor elevator lobby ceiling. The project, which will transform the building into a boutique luxury hotel, is in design development. Construction begins summer 2018.

Image 4 -The original building had three stories with two basement levels. Eleven stories and a penthouse were added in 1928, along with changes to the exterior façade. Both the original building and the 1928 renovation were designed by the former architectural firm of Warren, Knight and Davis.