For the past 20 years, Sidewalk Film Festival has brought new independent movies to downtown Birmingham and MovieMaker magazine named it one of the nation’s coolest film festivals. Now the nonprofit Sidewalk is getting a permanent home in Birmingham’s historic theater district.

The new 11,400-square-foot center will be in the basement of the 1920s Pizitz building and includes two 100-seat theaters, lounges, a bar, concession stand, classroom and offices. The $5 million project has been funded through capital campaigns and other fundraising efforts. Davis Architects designed the new cinema and film center and project architect Kurt Funderburg expects it to be completed by the end of July.

“The sight lines are paramount to a theater experience so we excavated a pit, due to the existing floor above, to provide the largest screen possible,” Funderburg explains. “We are isolating the vibration between spaces with a double acoustic partition, which is the elliptical wall around both theaters.”

Funderburg says the excavation of all the material out of the basement has been an obstacle that had to be overcome. All material was hauled out with motorized wheelbarrows through the freight elevator. And the concrete for the theater will be pumped in through the courtyard area. “This is truly a basement,” he adds. “We have exposed the ceiling in the gallery which shows the underside of the food hall above.”

Stewart Perry Company is the general contractor on the project and project manager David Harrison says that ceiling height restrictions in the basement presented challenges. So, it was decided that the best approach to achieve the line-of-sight in the theaters was to excavate down 4 feet into bedrock and then pour back steps leading up to the existing finished floor level, essentially creating a “bowl” in the basement.

“Issues that arose from this plan that had to be designed and constructed around were the removal of such a large quantity of bed rock using only an elevator to get up to street level, in addition to working around existing underground ducts that carry natural spring and storm water through the excavated areas.”

Once complete, the Sidewalk Cinema will complement the rest of the Pizitz Building, providing an entertainment venue along with the existing residential spaces and food hall vendors upstairs, Harrison says. The Pizitz Building offers one- and two-bedroom apartments, along with a rooftop pool, fitness center and event space. Its food hall contains 12 stalls and two full-service restaurants. 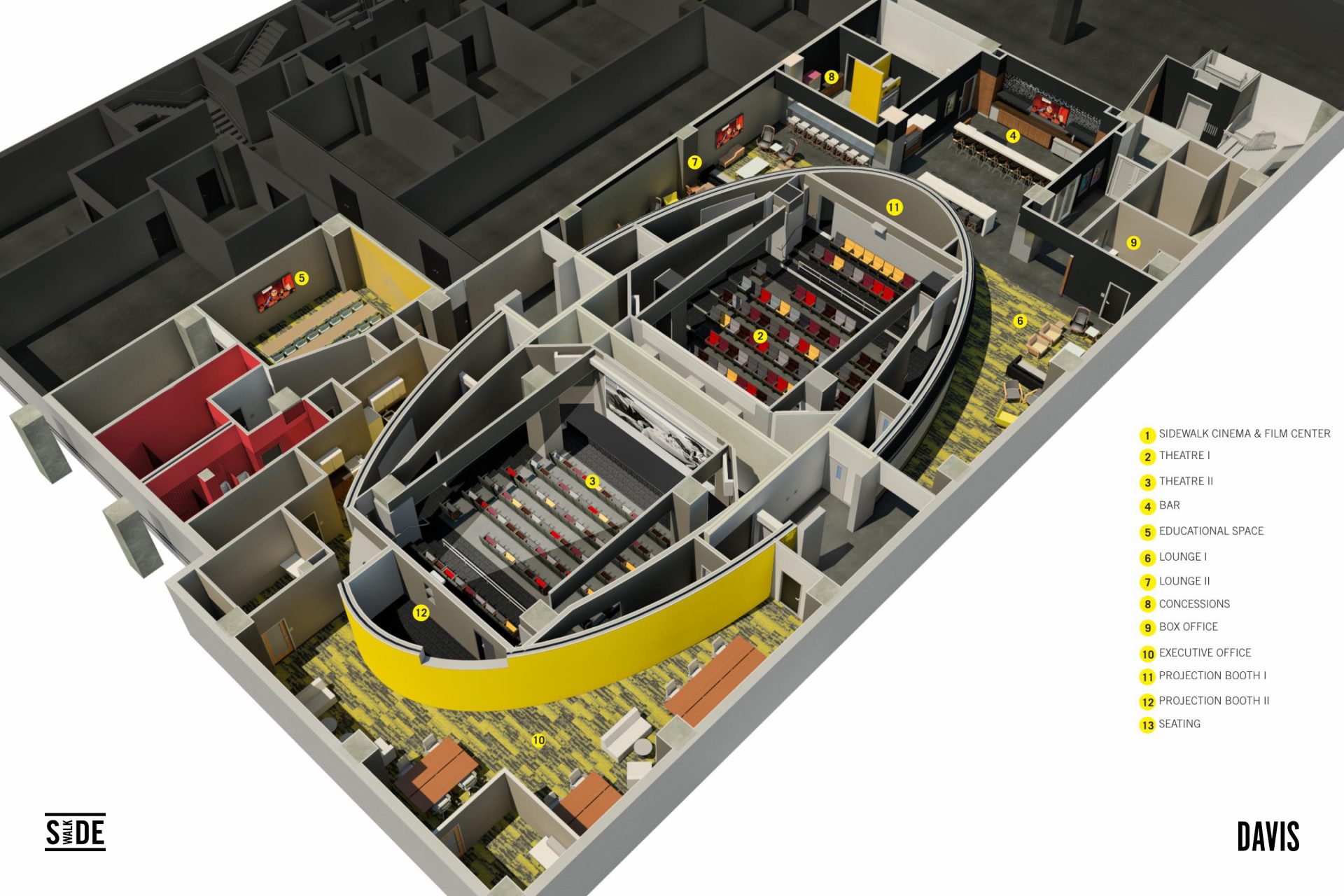 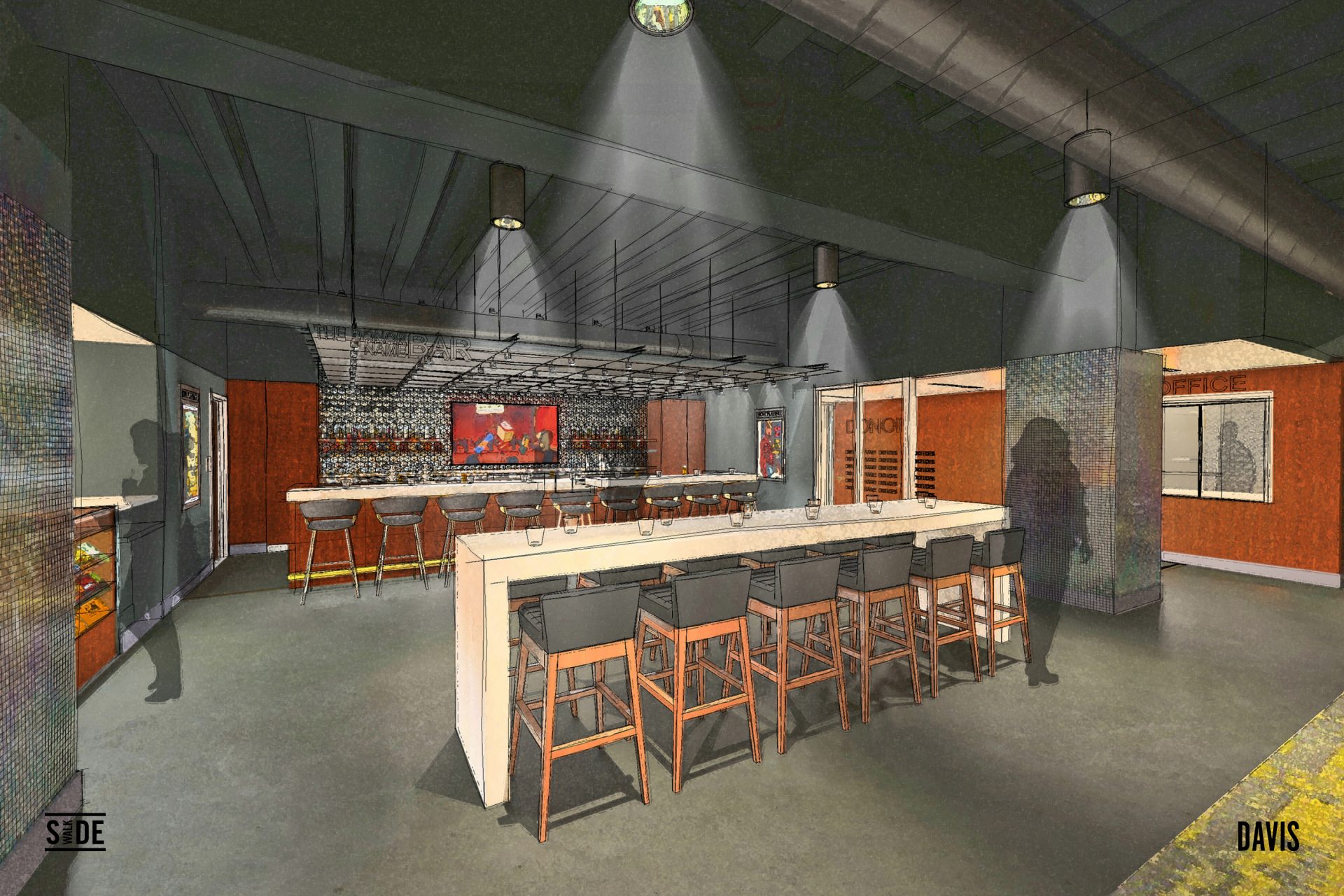 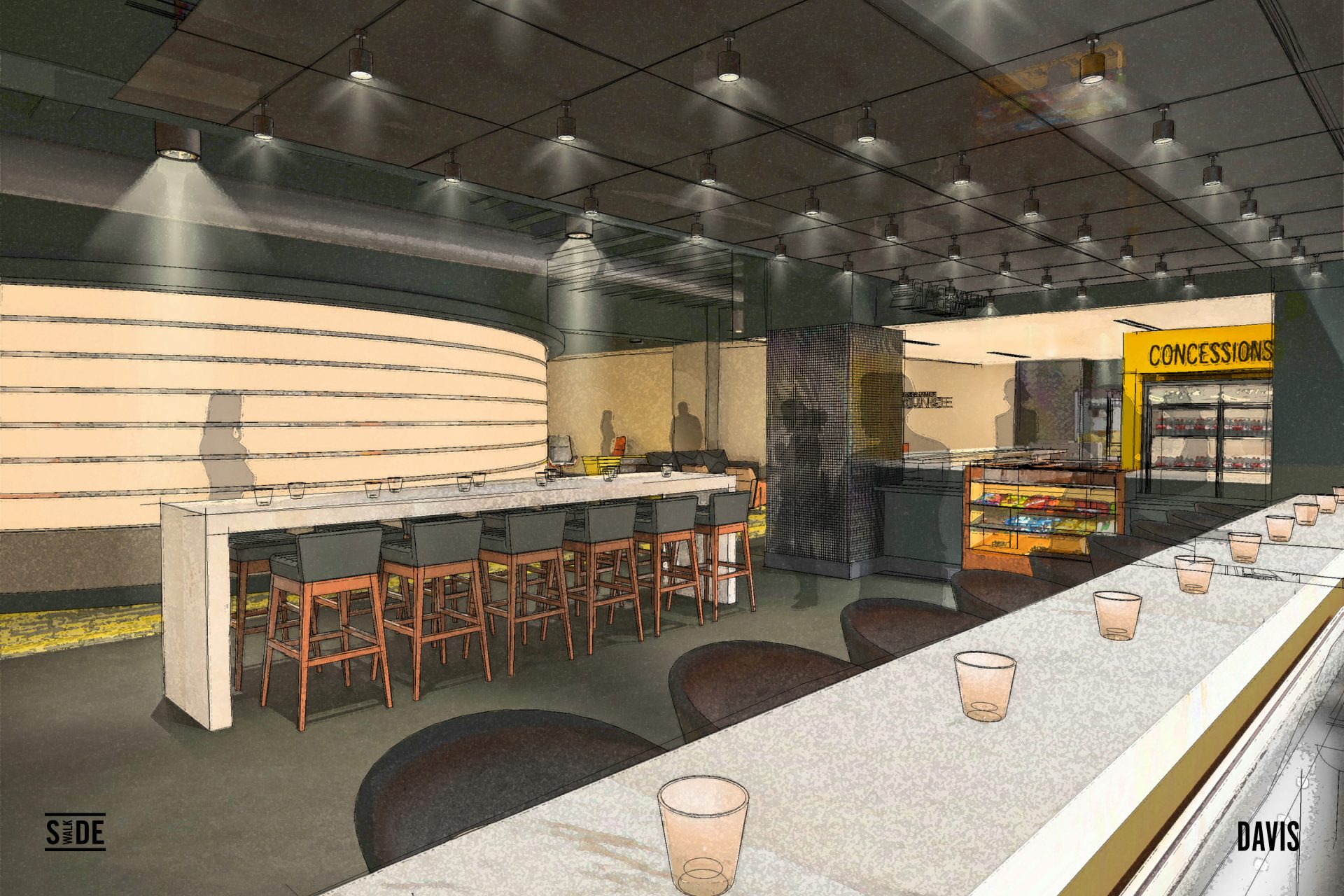 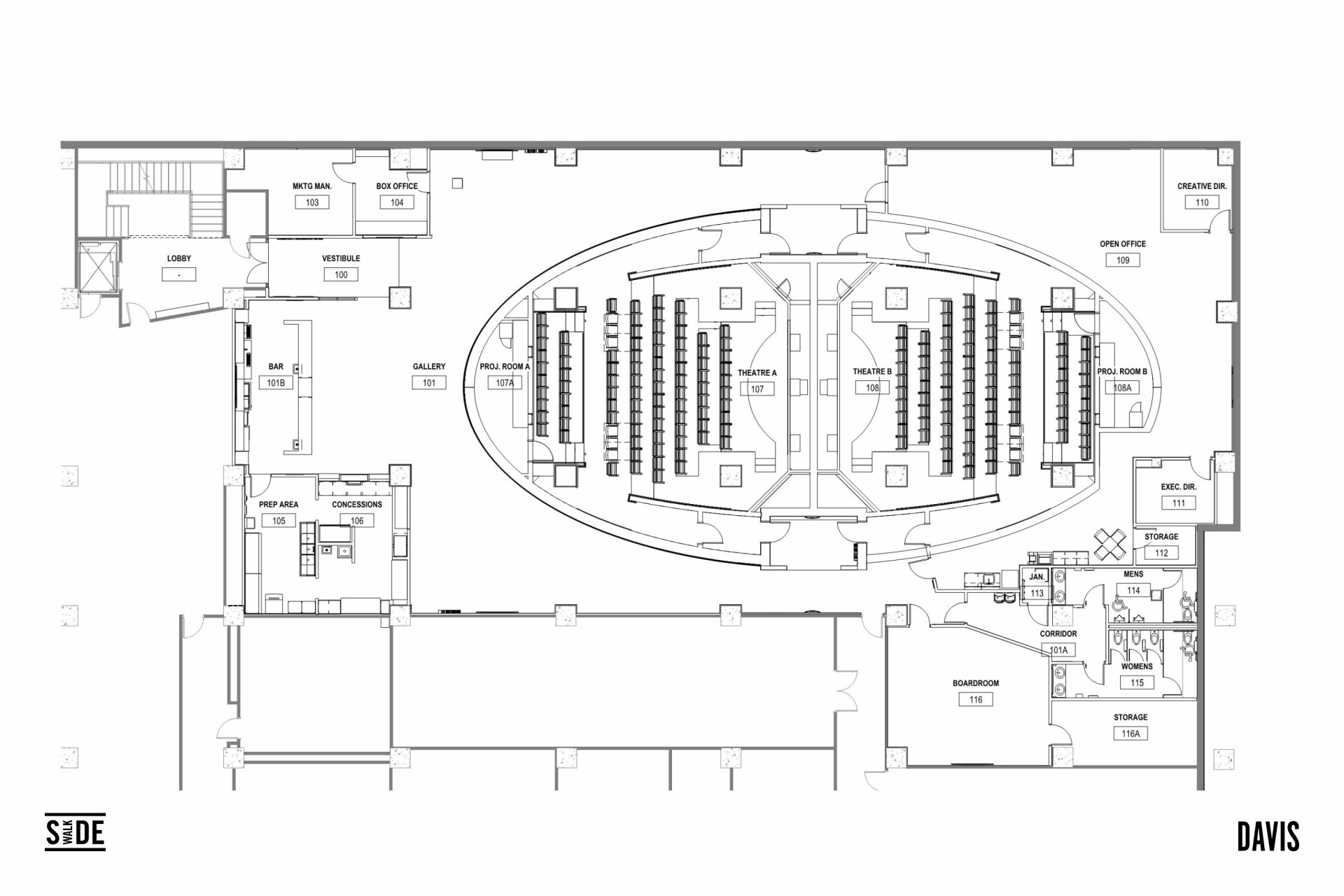 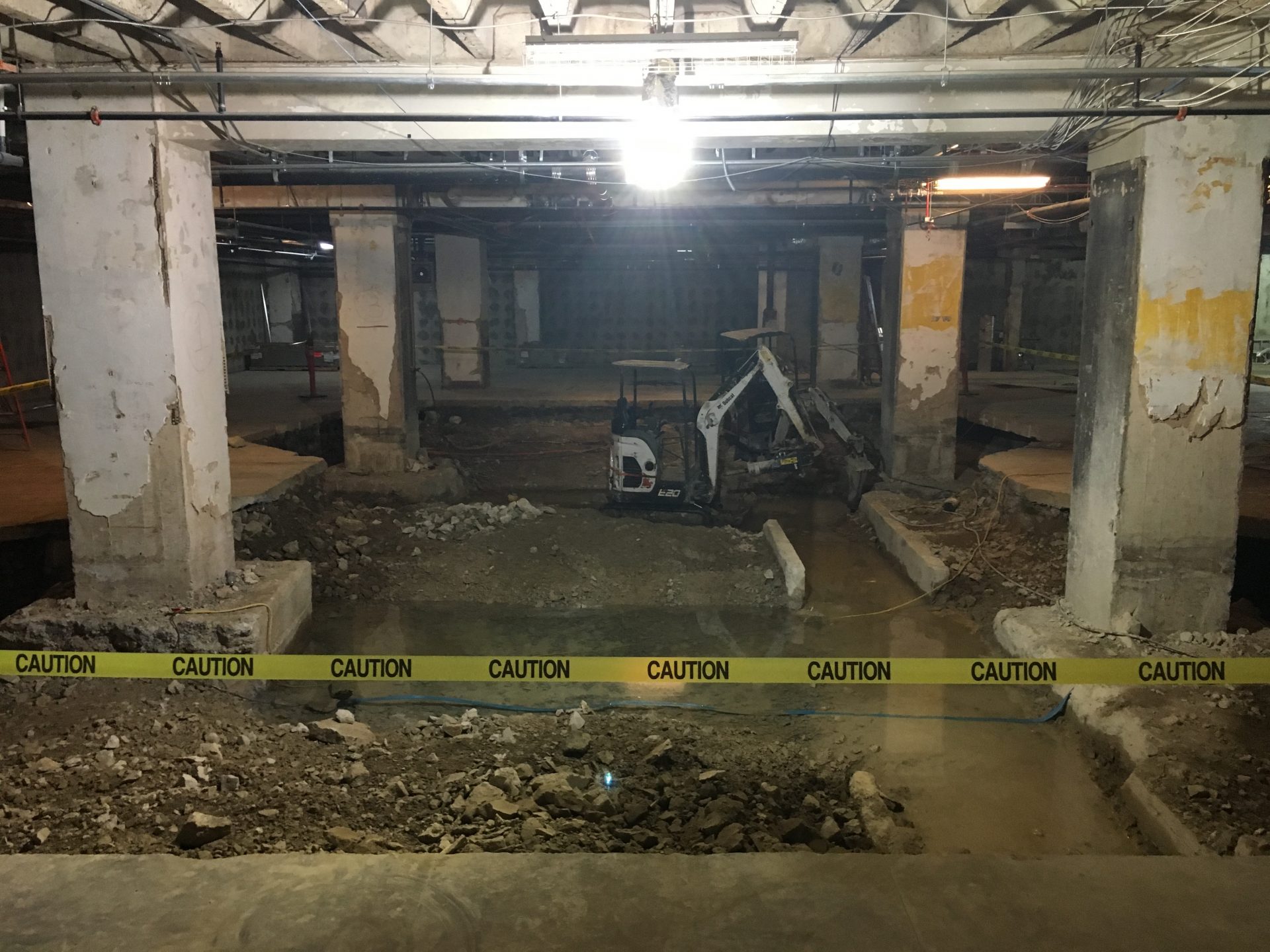 Image 2: The Sidewalk Cinema bar is an inviting, modern space for refreshments and socializing that offers a pleasant accompaniment to movie watching.

Image 3: The new 11,400-square-foot Sidewalk Cinema and Film Center will make its permanent home in the basement of the Pizitz building in downtown Birmingham. The project includes two 100-seat theaters, lounges, a bar, classroom, offices and a concession counter seen here.

Image 4: Designed by Davis Architects, the plan for the new Sidewalk Cinema and Film Center includes excavating the basement of a circa 1923 building located in Birmingham’s theater district.