Huntsville is home to NASA’s Marshall Space Flight Center and the United States Army Aviation & Missile Command at Redstone Arsenal. Now it’s also home to one of the largest indoor aquatics complexes in the United States.

The Huntsville Aquatics Center project combined an existing 50-meter swimming pool in the 50-year-old Brahan Spark Natatorium with two new swimming pools – one designed for easy access for people with limited mobility and a competition pool.

Nola | VanPeursem Architects in Huntsville began designing the new aquatics center in January 2015, working to address the many amenities desired by the Huntsville Swim Association and other users. The project received the 2018 North Alabama AIA Honor Award and the 2017 Facility of the Year award from the Alabama Recreation and Parks Association.

The AIA jury noted that the large windows lining the competition pool achieve “a poetic balance between the natural and created water bodies” and “a contemporary aesthetic is established both internally and externally, as exterior cladding is used to create a look of simplified modernity, while exposed mechanical systems throughout the interior give the building an industrial presence.”

The primary objective was to create a connected venue to support large regional swim meets. The design connects the three pools with a common entrance, locker facilities and support spaces.

Situated in Brahan Spring Park adjacent to a lake, the site created the opportunity to take advantage of park and water views for the competition pool’s 1,500-seat grandstand. Water is evident in the overall design such as the entry’s curvilinear roof.

Part of the design approach was a “wave look” with the column positions forming a “W” for water and the diagonal column positions reinforcing the notion of motion or movement, explains Rob Van Peursem of Nola | VanPeursem Architects.

Several design challenges were met, such as designing the building around the existing building and keeping it operational throughout the project. It was also necessary to develop a wet side and a dry side so spectators could stay dry, and also allow swimmers access to the three pools and locker room without crossing paths with the dry side. 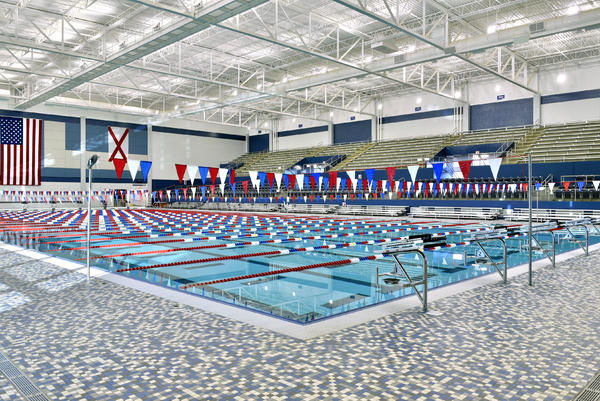 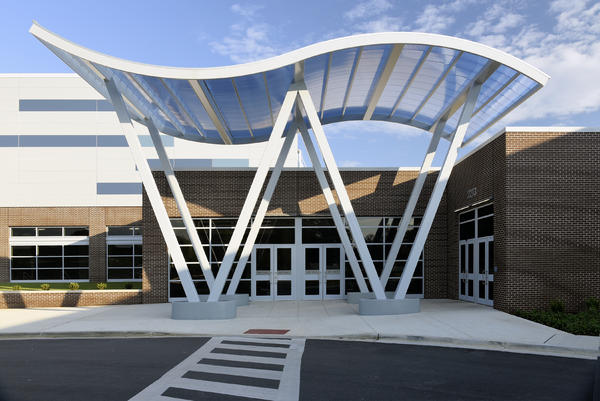 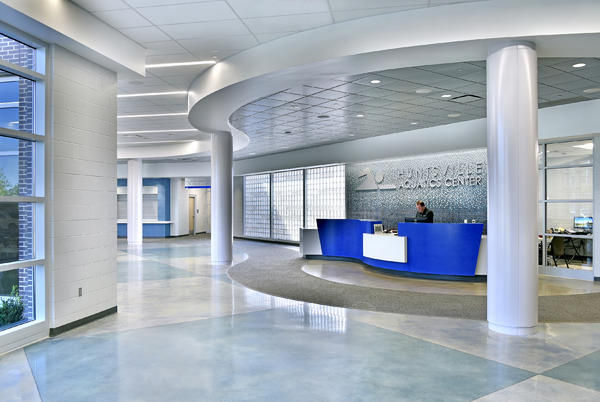 Image 1: The swimming pool is 50 meters long by 25 yards wide, and has two three-meter and two one-meter Maxi-Flex diving boards. The instructional pool provides warm water therapy at 90 degrees, and an in-water bench with jets as well as a handicapped access ramp into the water.

Image 3: The 90,000-square-foot aquatics center features state-of-the-art electrical and scoring systems. Generators were installed to restore lights in the event of power outages.

Image 4: The new Huntsville Aquatic Center, formerly Brahan Spring Park Natatorium, is said to be one of the nation’s largest indoor-outdoor swimming facilities. Amenities include shower and locker rooms, a sundeck and a motorized roof that can be rolled back on warm days.